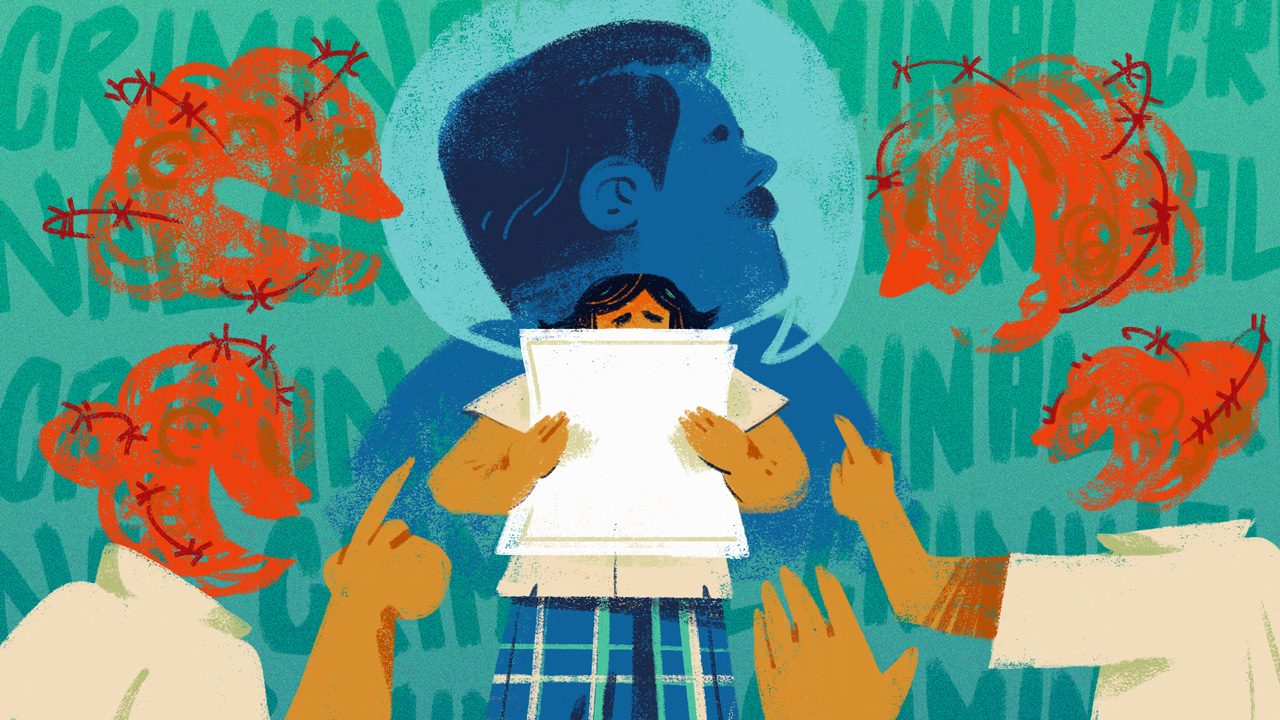 Dear friends who called my father a criminal,

Let me take you back to this HeKaSi fourth-grade class, where I talked about Philippine presidents and their accomplishments.

I was asked to stop when I started talking about martial law and its atrocities. Our history teacher, a lady known to be uncompromising and strict, jumped up from her table, grabbed me by my right arm, pushed me aside and started talking about the length of the “Maharlika Highway and how it linked Ilocos Norte to the rest of the country.

I freeze in shock. I was sweating, but I wasn’t able to sit up because I still felt the pain from his fingernails on my arm. So I stayed in front of the class the whole time. I saw you all sitting there, your faces, your reactions, your concern (or lack thereof). The course continued and ended as if I did not exist.

Fast forward to our high school chemistry class. Our Fulbright scholarship teacher was randomly ranting about Imelda Marcos’ criticisms. He said how “stupid” they were for linking the Marcos’ “alleged” stolen wealth to his shoe collection. He said his mom also collected shoes, and they weren’t even close to being rich, and shoes weren’t that expensive to collect anyway.

We were kids then, kids who didn’t know that some shoes were handcrafted from the finest leathers in Italy and adorned with diamonds and precious stones, while those most accessible to us were made in factories in third world countries. We considered Gibi and Skechers “expensive”. And, well, since I could afford to wear them to school, then I guessed he was right: collecting shoes wasn’t that expensive at all.

Finally, do you remember that day in our senior journalism class when we were asked to write about someone we were proud of? I decided to write about my father, who is flawed in many ways but fought against dictatorship as a young university student. I was proud – I still am – because not everyone in that room had a father whose body was marked with history. Her fate was bludgeoned by the darkest days but her story is the light of our generation. But, as expected, you didn’t see it that way.

Who are the real criminals?

You called my father a criminal. I still clearly remember all your faces, the mockery, the disdain. You knew my father. He gladly brought some of you home from our school when your Sun forgot to pick you up, or when it’s raining, or whatever. He was pitching our tents during our Girl Scout camping. Some of you have even seen him in church every Sunday. Oh, he’s not a saint, but I tell you he’s not a criminal either.

I write this to remind you of all these things. And that to this day you don’t seem sure who the real criminals are. Let me help you.

The crime, according to Judge Mario Campanilla, author of the Criminal Law Reviewer, is “an act of omission punishable by law”. Not declaring and paying your taxes for any misfortune or fortune you have had is a crime.

Crime, according to Republic Law 7080, accumulates property “by any combination or series of overt or criminal acts.” This is called plunder and is punishable by life imprisonmentor life imprisonment.

The crime, according to Republic Act 1379, is when an official acquires property in an amount that exceeds his legal income. According to the law, “there is a At first glance presumption that it was illegally acquired”. It’s called stealing. And in the book of Exodus, God said, “You shall not steal.

Dear friends who called my father a criminal, we have been friends since I can remember. And yet, you’re so quick to judge because my family doesn’t celebrate Marcos like you do. The funny thing is that you demand “respect” but reject the facts and the painstaking scholarship of established scholars before us. You declare them as “fake news” while you obtain your information from sources whose integrity cannot be verified.

Dear friends who called my father a criminal, I can never call you criminals since logical errors and cognitive dissonance are not crimes under Philippine laws. But they are dangerous in many ways, and the effects will be felt by the generation that comes after us. So I ask you to be aware of committing them.

Dear friends who called my father a criminal, pass by our home in Laoag and you will see my father leading a simple, imperfect but peaceful life. You’ll probably see him and my son playing legos or camping in the garden, because, yes, that’s what he’s mainly doing these days – taking care of the generation that comes after us. – Rappler.com

(The author is an experienced development worker who received her Masters in Public Administration from the Lee Kuan Yew School of Public Policy, National University of Singapore. She worked for the Philippine government from 2011 and is currently a researcher in Electoral Advocacy at the Ateneo School of Government.)