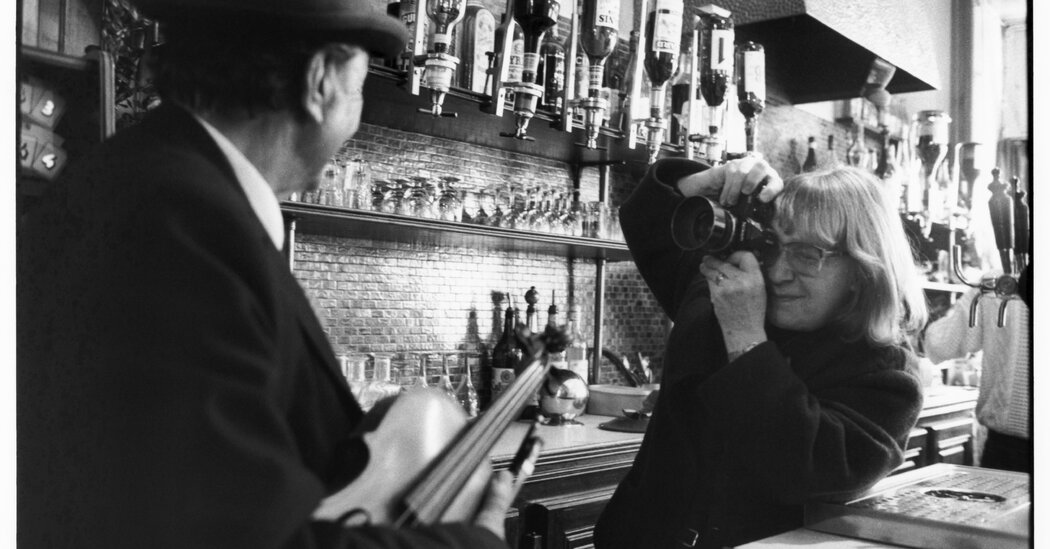 Sabine Weiss, whose striking photographs of dirty-faced children, food stall vendors and Roma dancers captured the struggles, hopes and occasional moments of humor on the streets of post-war France, died on December 28 at her home in Paris. She is 97 years old and is considered the last member of the humanist school of photography, which includes Robert Doisneau, Brassaï and Willy Ronis in its ranks.

When she started out in the late 1940s, no one called Ms. Weiss and her cohort “humanists”; this term came later, when historians in the 1970s began to elevate their work to canonical status. But they were undoubtedly a school, united by a common interest in grasping the spontaneous events which revealed the universal dignity of everyday life.

They’ve also all embraced advancements in camera technology – smaller, portable, with faster, more reliable mechanisms – that have given them the freedom to roam around Paris to film whatever caught their eye.

“What I shot at the time was basically people on the street,” Ms. Weiss said in a interview for the Jeu de Paume, a cultural institution in Paris which organized an exhibition of his work in 2016. “I liked it and I was drawn to it. I had to take pictures of something, but never of settings, always spontaneous.

Its original land was the streets and wasteland filled with garbage of a Paris barely emerging from decades of war and poverty. A boy and a girl pumping water from a driveway well; a horse rearing up in a snowy field; an elderly couple burying their pet dog – moments like these, both daily and deeply moving, were his business.

The only woman among the humanists, Ms. Weiss restrained to this label, because she considered her street photography to be part of her work. Most of his career has been spent as a fashion photographer and photojournalist, photographing celebrities like Brigitte Bardot and musicians like Benjamin Britten.

“From the start, I had to make a living from photography; it was not something artistic, “Weiss told Agence France-Presse in 2014.” It was a profession, I was a photographer.

Despite its early inclusion in two major exhibitions at the Museum of Modern Art – “European post-war photography, “in 1953, and”Man’s family”, In 1955, both organized by Edward Steichen – she rarely showed her personal work, one of the reasons she remains less well known than her fellow humanists.

That has started to change: She has been the subject of three major exhibitions in France over the past decade, and a new generation of fans have come to admire her supernatural intuition for what Henri Cartier-Bresson, an older member of the humanists, called the decisive moment – the fleeting smile, the sudden burst of joy that revealed the inner reality of a subject.

“She was a very spontaneous photographer,” said Virginie Chardin, who organized two of the shows, in a telephone interview. “She was primarily interested in people.

Sabine Weber was born on July 23, 1924 in Saint-Gingolph, Switzerland, nestled between Lake Geneva and the French border. Her father, Louis, was a chemist and her mother, Sonia, a housewife.

Encouraged by her father, she embarks on photography very early on. She bought a Bakelite camera – “it was like a toy,” she said – with her own money and learned to develop her own film.

Shortly after her family moved to Geneva, she dropped out of high school and in 1942 began a four-year apprenticeship with the famous Swiss photographer. Frédéric Boissonnas. Another apprenticeship, this time with the fashion photographer Willy maywald, took her to Paris, where she helped photograph Christian Dior’s “New Look” show in 1947.

She met the American painter Hugues Weiss in 1949. They married a year later, around the same time that she opened her own studio on Boulevard Murat, a then popular district in the southwest of Paris. Across the street was her fellow Swiss artist and close friend Alberto Giacometti, whom she photographed frequently.

The Weisses shared the studio, which was only 215 square feet in size, lacked running water, and also served as a home. Over the years, they added to it and stayed there for the rest of their lives.

The couple adopted a daughter, Marion, who survives Ms Weiss, as well as three grandchildren. Mr. Weiss died in 2007.

Just months after opening her studio, Ms. Weiss received a phone call from Vogue’s photo editor, who asked to see some of her work. When she arrived at the magazine’s offices, she found M. Doisneau, himself already a famous photographer; he was so impressed with her work that he recommended her to the Rapho agency, which represents most of the humanists and other great French photographers.

Soon she had more work than she could handle.

Along with fashion magazines, she has produced reports for European news magazines such as Picture Post, Paris Match and Die Woche. She also shot for American publications including Time, Life, Newsweek and the New York Times Magazine, which brought her to New York in 1955 to photograph Manhattan street scenes.

Due to her busy professional schedule, Ms. Weiss would often shoot her street scenes at night, walking around hazy Paris with her husband. He is the subject of one of her most famous photographs, “Man, Running” (1953) – seeing a cobblestone alley lit by a lamppost, she told him to “run, but not too far”.

It is Mr. Weiss who prompts her to show her personal work to curators, just as she often lends a critical eye to his paintings.

“They were symbiotic,” Marion Weiss said in a telephone interview. “They could understand each other’s work as if it was their own.”

After conservatives and historians began embracing the humanist school in the 1970s, Ms. Weiss found more time and money to pursue her own interests. She has traveled extensively, photographing street life in Cairo and religious ceremonies in India. And when she got home, she returned to the streets of Paris.

She quit taking photos in 2011. Although she owned a digital camera by then and wondered how easily she could capture spontaneous street scenes, she found with dismay that times had changed: despite (or can -being due to) the ubiquity of cameras, strangers were reluctant to let her take their picture.

In 2017, Ms. Weiss donated her entire archive, including 200,000 negatives, many of which have never been seen publicly, to the Musée de l’Elysée in Lausanne, Switzerland.

In March, the Casa dei Tre Oci, a museum in Venice, will open another major exhibition of her work, curated by Ms. Chardin. She will then travel to Genoa, Italy, and finally to Lausanne, where, if all goes as planned, the exhibition will be expanded with new photographs added from her archives.

Shocking! Here’s how Nora Fatehi spends her income, learn more about her lifestyle