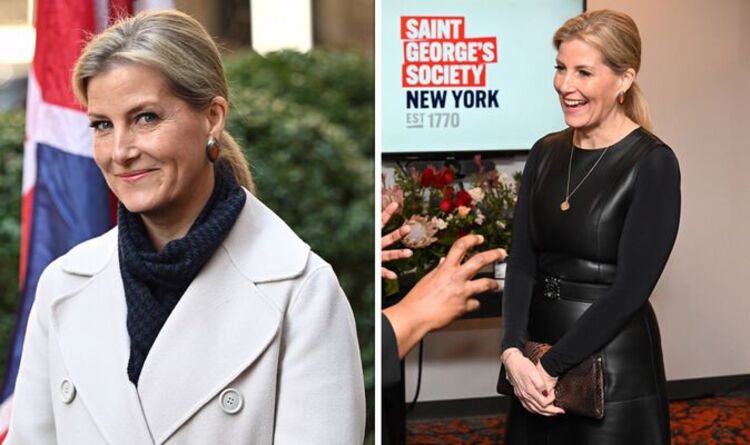 Sophie, Countess of Wessex, is in New York to join United Nations (UN) Women and the Georgetown Institute for Women, Peace and Security (GIWPS) to “discuss respect for the human rights of women and girls in conflicts”. The Royal Family added on Twitter that Sophie will undertake commitments “to equality in the workplace with 100 Women in Finance, a global network of professionals from the finance and alternative investment sectors working together to empower women at every stage of their career.

The Countess first stopped at the Queen Elizabeth II Garden in New York, where she met consuls general from across the Commonwealth.

Photos of Sophie planting a tree in the garden were posted on the Royal Family’s Twitter account, with the caption: “The garden celebrates the historic bonds of friendship between the UK, the US and the Commonwealth, and today the Countess planted a rosemary bush to mark Commonwealth Day.

The message continued: “The Countess then opened the new 250 year old office of @SGS_NY and heard about their work to support vulnerable people with British and Commonwealth heritage in the city.

“The Countess has met academically gifted students from across the Commonwealth, who have received scholarships from the Society.”

The Countess boots, however, are a new pair and are from iconic designer Saint Laurent.

These are black leather ankle boots in the “Lou 95” style.

When Sophie toured indoor venues, speaking with charity workers and students, she took off her coat and showed off a black leather dress, cinched at the waist with a black belt.

The belt was attached to the dress and gave it an even more modern touch.

The sleeveless midi dress was from Spanish luxury fashion house Loewe and Sophie teamed it with a black long-sleeved form-fitting top underneath.

On the jewelry side, Sophie wore a beautiful pair of red and silver oval earrings by Italian designer Lucia Odescalchi.

Royal fans were quick to express their thoughts on Sophie’s outfit on Twitter, with many praising the royal’s look.

Royal fan @theroyalhobby said: “Oh how wonderful! I’m so excited for the rest of his tour.

User @nbyrne01 commented, “She continues to be amazing.”

User @mgt_thompson added: “Love this royal. Down to earth, beautiful nature, no fakeness.

Between the ages of 1 and 16, I never wore shoes – Kennedy Agyapong