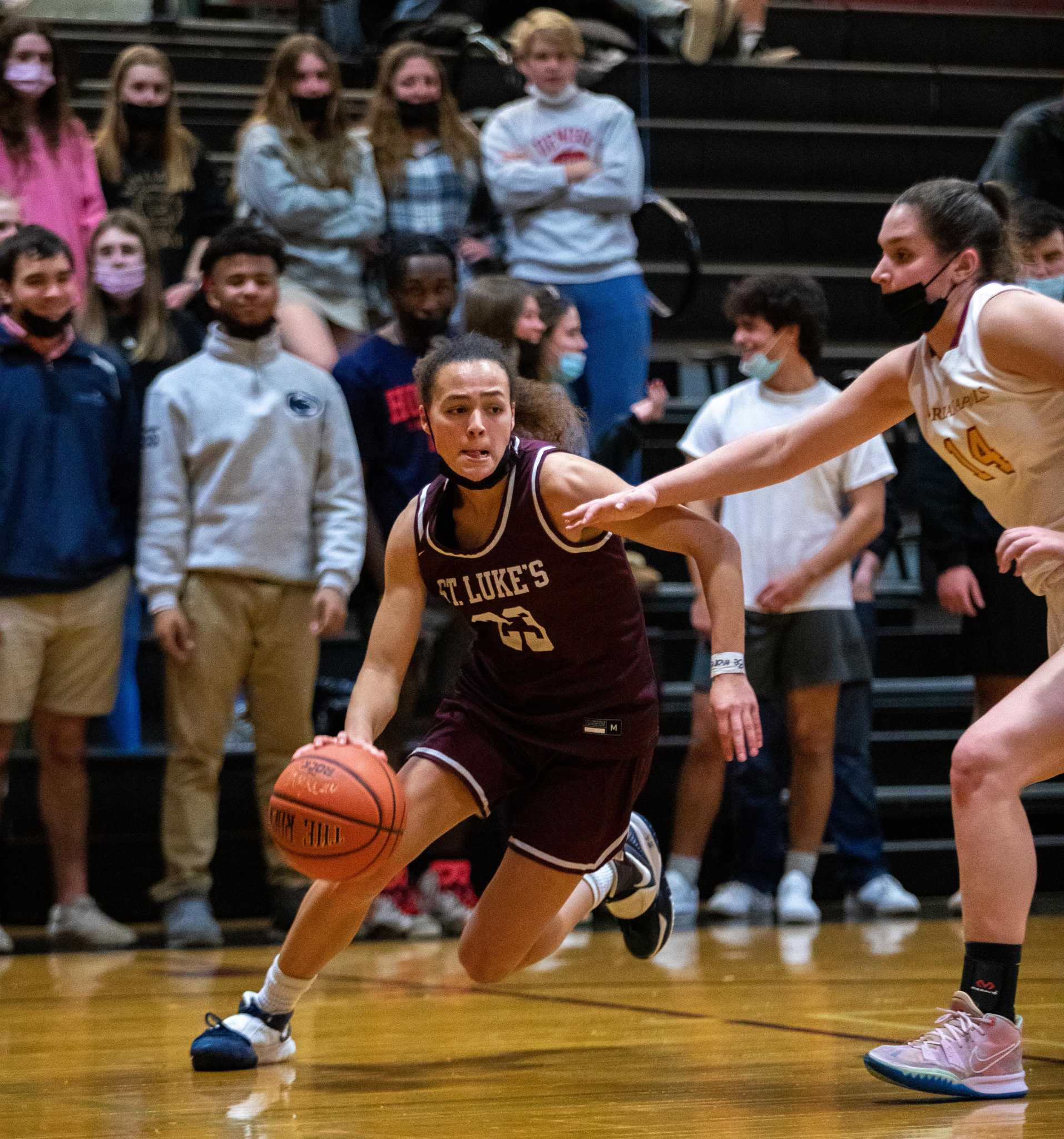 St. Luke’s Mackenzie Nelson honored with Gatorade award after challenging himself to be better

With 27 college basketball scholarship offers at last count, Mackenzie Nelson said she will evaluate all opportunities in her recruiting process.

“I didn’t say no to anybody,” the St. Luke junior guard said. “I’m not that person that if I get an offer from a school, I have to go there and commit right away. I am completely open.

There was one impressive line cemented in Nelson’s career resume on Thursday: 2021-22 Gatorade Connecticut Girls Basketball Player of the Year.

“Obviously we had a fantastic season as a team until that tough loss to Brooks,” Nelson said. “It got us attention and a chance to show off all my hard work. It’s huge for me. I’m very grateful.

“I wasn’t surprised at all (Nelson won),” St. Luke’s coach Matt Ward said. “She’s an amazing player. Playing across New England, people could see that. I thought it would be between Mackenzie and (senior teammate) Caroline Lau and they wouldn’t have gone wrong picking either one or the other.

While the CIAC State Tournament is going excitingly for multiple divisions across the championships at Mohegan Sun, it would be difficult to produce the quality of competition at the NEPSAC Class B Championship this past Sunday at Brooks School in North Andover, Mass.

Brooks had Massachusetts Gatorade winner Taina Mair and 6-2 Samantha Dewey, ranked second in New England behind Mair in the Class of 2022 by Prep Girls Hoops. Brooks also had the home court advantage.

St. Luke’s, which went 26-0 as the FAA champion, had Lau, ranked No. 7, and Nelson, considered New England’s best player in the class of 23. ESPN HoopGurlz ranked Nelson 42nd in the country in his class.

The result was a classic.

Brooks won 76-75 on Mair’s field goal against a double team with 4.4 seconds left in overtime. Headed to BC, Mair scored 37 points. Nelson? Well, she was 45.

“I didn’t really get a chance to fully grasp it in the moment, it’s so intense and we lost,” Ward said. “I went back and watched the game twice, once as a coach, once as a fan. It was the best high school game I’ve ever seen.

“They didn’t help much at first and Mackenzie was able to get whatever she wanted. Since they were helping out, she was really good at giving out open looks. She was locked up. »

Nelson did not attend the New Canaan school when she lost to Brooks, 63-45, in the 2020 NEPSAC B final. She was a freshman at Greenwich High, taking first-grade honors GameTimeCT team and seeing their season end before the state semifinals due to the COVID outbreak.

“It was heartbreaking for us,” Nelson said.

With the schedule severely limited last year due to COVID, there was no chance of avenging Brooks’ loss. Nelson felt the consequences.

“Whenever we had bad practice or had fun, we moaned and moaned, Ward would say, ‘Shell drill.'” she said. “That’s when he mentioned Brooks. It was the motivation. This has become our goal. »

It was the last game of his stellar career at St. Luke’s for Lau, who will play at Northwestern. Traveling three hours to and Brooks, Nelson said the team recognized there was a lot at stake.

“We were playing fantastically, up 10 (after three quarters),” Nelson said. “We also knew Brooks would go for a run. They went up in the fourth quarter. I was frustrated and (Ward) pulled me aside and said, “Look, we only have to win by one point.”

St. Luke’s tied the game to force overtime. Still, it would be Brooks who would win by one point.

“It was a great game to be in,” Nelson said. “I really felt for Caroline (who had 21 points), the coaches and everyone who was part of the game (2020). It was the best game we’ve played all year. It’s hard to comparing AAU and high school, two different games, but that was the level of competition.

Mackenzie and Ava Sollenne have known each other since kindergarten and have played basketball together since third grade in the Greenwich Recreational League.

“Family dynamics? It’s great,” Nelson said. “With my own sister, I’m going to say, ‘Make your free throws.’ I wouldn’t say that to anyone else, but I think it pushes us and gives us something to fight for. It’s the love of family. We have a bond.

“It’s a lot of fun for me,” Ward said. “It’s unique. They are all so different. There is a sister who comes and goes in training. They are sisters. The common denominator is that they all love basketball. We always say (when breaking up a huddle): “1-2-3, family!” So we are all a bit together.

Ward saw Nelson play against St. Luke’s Junior University when she was in eighth grade. He told his parents about his school attendance.

“She was ready to come, but also wanted to try out high school to see how it went,” Ward said. “I certainly understood. At some point during this (first year) year, I reached out again to see if there was any interest.

There was. Nelson said it was not an easy decision. She had a great first year. Greenwich is proud of its academics. The competition, she says, went well. She felt like she was being challenged in the games.

“It was more about being challenged every day,” Nelson said. “I wanted to defend and have someone to defend me. Caroline and I pushed each other. We went back and forth every practice. It’s not like we hurt each other, but it was really good competition. That’s what I wasn’t getting at Greenwich and could get at St. Luke’s.

Sollenne decided to attend Saint-Luc about a month after Nelson.

Those intense scrums between teams led by Lau and Nelson? “My team has won more times,” Nelson volunteered. A little sister needle.

“One thing that I often talk to Mackenzie about is that she’s so talented, so athletic that sometimes she can rely on it a little too much,” Ward said. “I don’t want her to lose sight of the fundamentals she will need at the next level. Small things she can obviously do, like pulling out a good box every time.

“His filming went very well his year. She shot like 35 percent on three. She walks over to the basket. If she can develop a consistent mid-range game, she’ll be really hard to stop. Defense, no worries.

“I’m happy with my ability to handle the ball,” Nelson said. “I think I kind of bring a level of balance and composure, I go at my own pace, I run when I want to run. I also managed to get to the basket. Last season was also the best I’ve ever shot, but I still think I can shoot a better percentage.

“Greenwich is huge and St Luke’s is pretty much the opposite. I think it was a good experience until college. I learned to adapt. Almost everyone knows everyone at St. Luke’s.

And that’s what made the accidental death of St. Luke’s second student, Teddy Balkind, in a hockey game particularly tragic for the students.

“I didn’t know Teddy personally, but a lot of our second graders were friends of Teddy and a lot of us are friends with his sister,” Nelson said. “It’s a very small world. The drama has affected all of us, the whole team.

“It was obviously in the middle of the basketball season. We practiced, or (would have) just gone and shot the ball. Don’t worry instead of sitting in your room. At first it was the last thing you wanted to do, but it became a springboard for a lot of people to help us move forward. Basketball has become our light at the end of the tunnel.

Deepika Padukone at Kardashians—faux leather is the cool new statement