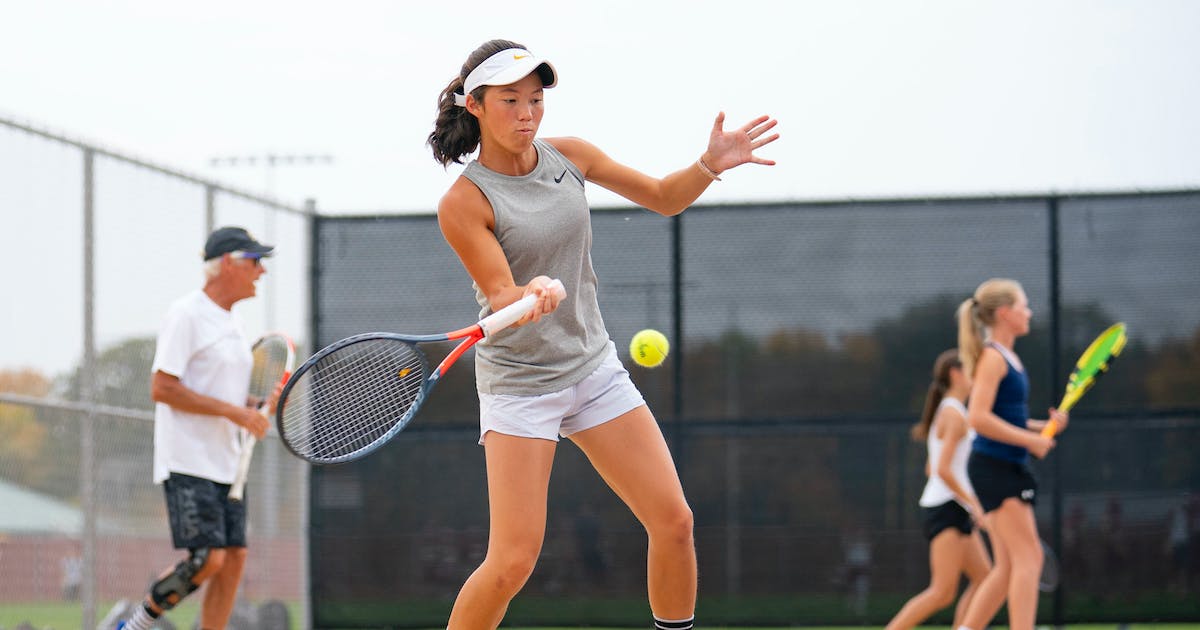 In the fall of 2016, she made her college debut as a seventh grader. She won all three No.1 singles matches at a tournament in Anoka, though her opponents and scores are unclear. His father, Doug, was there.

Throughout his six-year career, Adkins has earned accolades from Crimson coach Dan Haertl as “the most dedicated player I have ever had”.

She takes the No.1 ranking in the Class 2A playoffs, which begin Tuesday.

Adkins, a four-time state tournament qualifier, placed third in freshman in 2018 and fourth in sophomore. She compared the intensity of these matches to what she saw in the United States Tennis Association’s regional or national tournaments.

â€œYou have to fight so hard for every point,â€ Adkins said. “My ability to fight and score points is my style for winning tough games. Fighting on the pitch is what makes the sport fun.”

Except for one stretch when a family tragedy took the joy out of his game.

His career began in a linear fashion. She joined the Maple Grove program just months after Charlie, the second of her two older brothers who were excellent tennis players, graduated. Charlie and Zachary helped the Crimson reach their first state tournament in 2012. Expectations soared for Zoe, who also excelled in the sport from a young age.

Sometimes it helps to be third in the order of birth. Charlie and Zachary started in a basic community education tennis program before their instructor realized they could handle more advanced training. Meanwhile, Zoe “got on our private bus right away,” Charlie said. “And she’s also watched tennis a lot and learned so much about how to play.”

When Adkins clinched first place in singles for her first varsity game, the seventh-year youngster met the moment.

â€œI was confident in my game and loved the competition so once on the pitch I was just excited to play,â€ said Adkins. “My dad was there and was happy to see me compete well in a new environment.”

Doug Adkins watched most of his daughter’s high school games, often alone to avoid sharing his apprehension with others or because his wife, Jody, had had enough and moved to another viewing area.

â€œHe was getting really stressed out during my games,â€ Adkins said. “He put his head in his hands. And he always brought a Kindle to read. I lost a point and looked up, and I saw him sitting there reading, trying not to care.”

Adkins enjoyed his father’s presence, until his unexpected death in May 2020.

Doug Adkins, 53, was a partner and creative director of the Hunt Adkins agency in Minneapolis. His team produced the Twins ‘”Get to Know’ Em” campaign in 2001.

Her loss remained with Adkins as she returned to court. She struggled through a Universal Tennis Rating tournament held on Father’s Day at Maple Grove High School just weeks after her father died.

â€œI managed a few games,â€ Adkins said. “But that wasn’t how I wanted to play or feel on the pitch. I felt empty. I didn’t feel that spark when I played. I felt super melancholy.”

â€œThe year after his death was probably the most difficult year I have ever had,â€ Adkins said. “It was horrible. There were times when I struggled to play. I was going on the pitch and feeling good, but it was still dragging on.”

Adkins said she found the motivation to return to the field fight, a renewal that coincided with what she called an “acceptance step” of “I’m fine now.”

Doug Adkins passed on the pleasure of reading and writing to his daughter, who also credits her with her sense of humor, sarcasm and love of computer games. Its competitiveness comes from its two parents.

When Adkins is at her game, she can feel it in his increased coverage of the pitch.

â€œWhenever I feel nervous or tense on the pitch, my legs are the first things that don’t feel perfect,â€ she said. â€œWhen I move well on the pitch, that’s when everything else is better. My self-confidence increases and my state of mind is a little stronger.

“I have the mindset of owning my shots. Even when you might run out from time to time.”