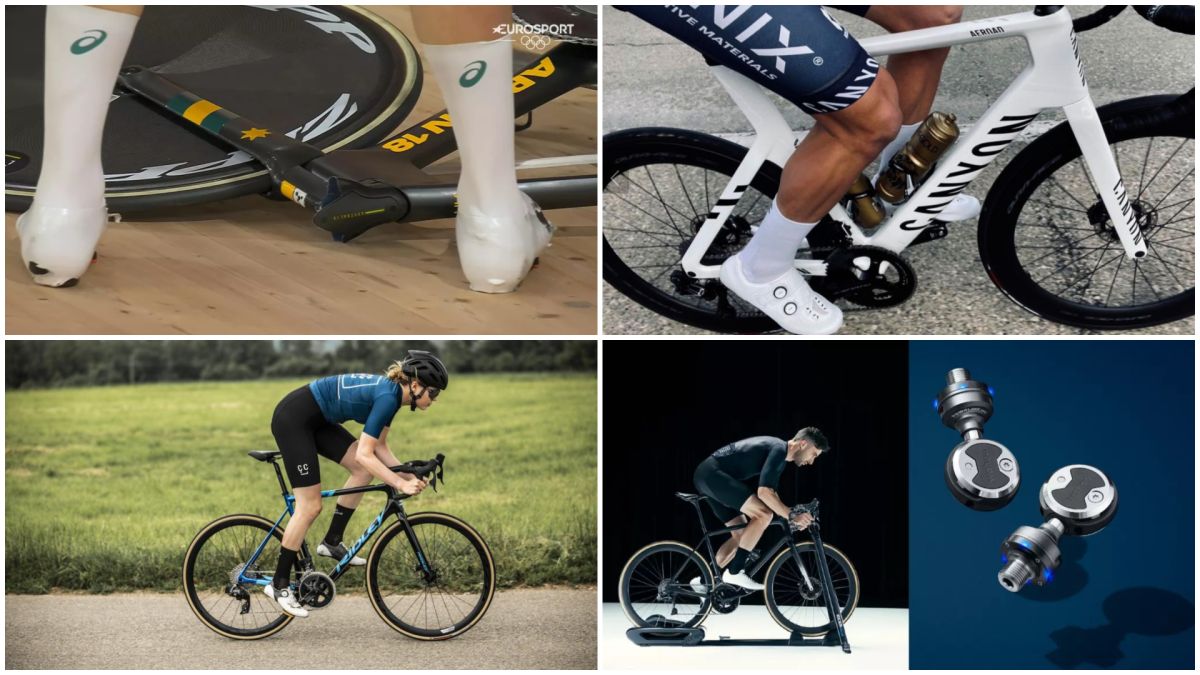 This month we have discounted Ridley frames, new Shimano shoes spotted in the wild and the curious new handlebar hack from Tim Wellens. We go into detail on the most recent developments regarding the Australian Pursuit Team’s broken handlebars at the Tokyo Olympics and update you on Wahoo’s launch of its Powrlink Zero trainer and Wahoo Kickr Rollr.

Finally, we wrap things up with a look at this edition’s Bike of the Month, the Pearson Summon the Blood – a titanium gravel bike featuring Classified’s innovative two-speed hub gear.

The new frames are said to retain the same ride quality and features as their more expensive counterparts – the increased weight from the carbon change will be the trade-off for the lower list price.

That said, the new Helium frames are said to weigh less than 1000 grams, which is still very respectable, although of course not at the cutting edge of lightweight frames. The Helium SLX Disc has a claimed weight of 780g, for context.

Donning the feet of Mathieu van der Poel, we’ve spotted what appears to be an update to Shimano’s range topping the S-Phyre 902 road shoes – which we’ll take a punt and suggest they will be called S-Phyre 903.

The differences appear to be quite subtle, with more perforations for ventilation on the newer model and more devious lace routing – presumably to help distribute tension more evenly.

We’re set for a number of shoe releases this year, with a potential new S-Works model having been spotted earlier during the Saudi tour.

Since the UCI’s ban on the “puppy paws” or “invisible aero bars” position, where a rider rests their forearms on top of their bars, Tim Wellens – a longtime proponent of the position – had to go back to board drawing.

The solution Wellens seems to have found is to place a few inserts under his handlebar tape to help the position of the “aero hoods”—where a rider holds the hoods with their arms parallel to the ground—more easily.

It gives an unusual look, but it seems to work for him. Perhaps more pertinently, he doesn’t appear to be breaking UCI rules – for now at least.

For the full story on Wellens’ bike setup and all the details, you can find it here.

Sadly, some of the most enduring images of the Tokyo Olympics will be of Alex Porter collapsing heavily after his handlebars snapped at 60km/h during the qualifying laps of the team pursuit.

After publishing a report on the incident, AusCycling apologized to “Alex and his fellow riders, the entire Australian Olympic team and the Australian public, who all had a right to expect better” . It was also acknowledged that a “lack of adequate processes and policies meant that issues were not detected and corrected before the team raced at the Games”.

14 recommendations were put forward by mechanical and aeronautical engineer John Baker, who produced the report, along with specific takeaways: that the national track cycling team provided “inadequate specifications for bespoke handlebars” as well as not “performing adequate fatigue testing.”

The bars’ manufacturer, Melbourne-based Bastion Cycles, was also named in the report and received five recommendations, including a call to review design and production quality assurance procedures. The equipment in question was his basic CA-06 bar, which unsurprisingly is no longer available.

Our full story on the report can be found here.

Wahoo has released two big product launches, the first being a power meter version of its Speedplay pedals. This has been expected for a while now – and has been on the wishlist for even longer.

They use a rechargeable lithium-ion battery and last for 75 hours, while accuracy is +/- 1% with no calibration required. The stack height has been increased from 11.5mm to 13mm to accommodate the pods, making it taller than Favero Assioma (10.5mm) and Garmin Rally (12.2mm).

A longer spindle length for the Powrlink Zero – 55mm compared to 53mm for the standard Speedplay Zero – also slightly increases the Q-factor compared to the competition. Garmin pedals stick with 53mm while Assioma measures 54mm.

Wahoo says it’s taken a traditional design and envisioned it for the Kickr Rollr offering an option for those who want to combine “the convenience and natural ride feel of rollers with the benefits of strength and connectivity. controlled”.

Since Wahoo is also a manufacturer of direct-drive smart trainers, it would be unwise to criticize them, but what it does say is that the Kickr Rollr is “designed to fit a wide range of body sizes. of chassis and tires via adjustable wheelbase with quick-release clamp… easy to get on and off bikes, making it ideal for athletes who want to quickly transition from indoor training to riding outdoors, as well than for households where multiple cyclists use the same trainer.

Bike of the Month: Summon the Blood

This month, for Bike of the Month, we have the Pearson Summon The Blood, a snappy titanium gravel bike designed for both shorter gravel blasts and lighter bikepacking adventures.

It comes equipped with the underside of the downtube mount, top tube mounts and mounts for a rear rack – in addition to the two inside the main triangle. The geometry is snappier, with short (for a gravel bike) 425mm chainstays and a particularly steep 73-degree head angle in a size medium.

However, it still offers plenty of clearance, capable of handling 45mm x 700c – and wider still at 650b.

Pearson is among a growing number of brands offering builds with Classified’s two-speed hub. We were quite impressed with the system when we tested it previously, offering a marked improvement over shifting a front derailleur.

The high price means it’s not a product we’d recommend to everyone, but if you’ve got the cash to spare – and if you’re not too attached to any particular wheelset – it’s worth definitely worth a try.

We’ll post our review in the coming weeks, in the meantime you can view the bike on the Pearson website here

The greatest brand of all time