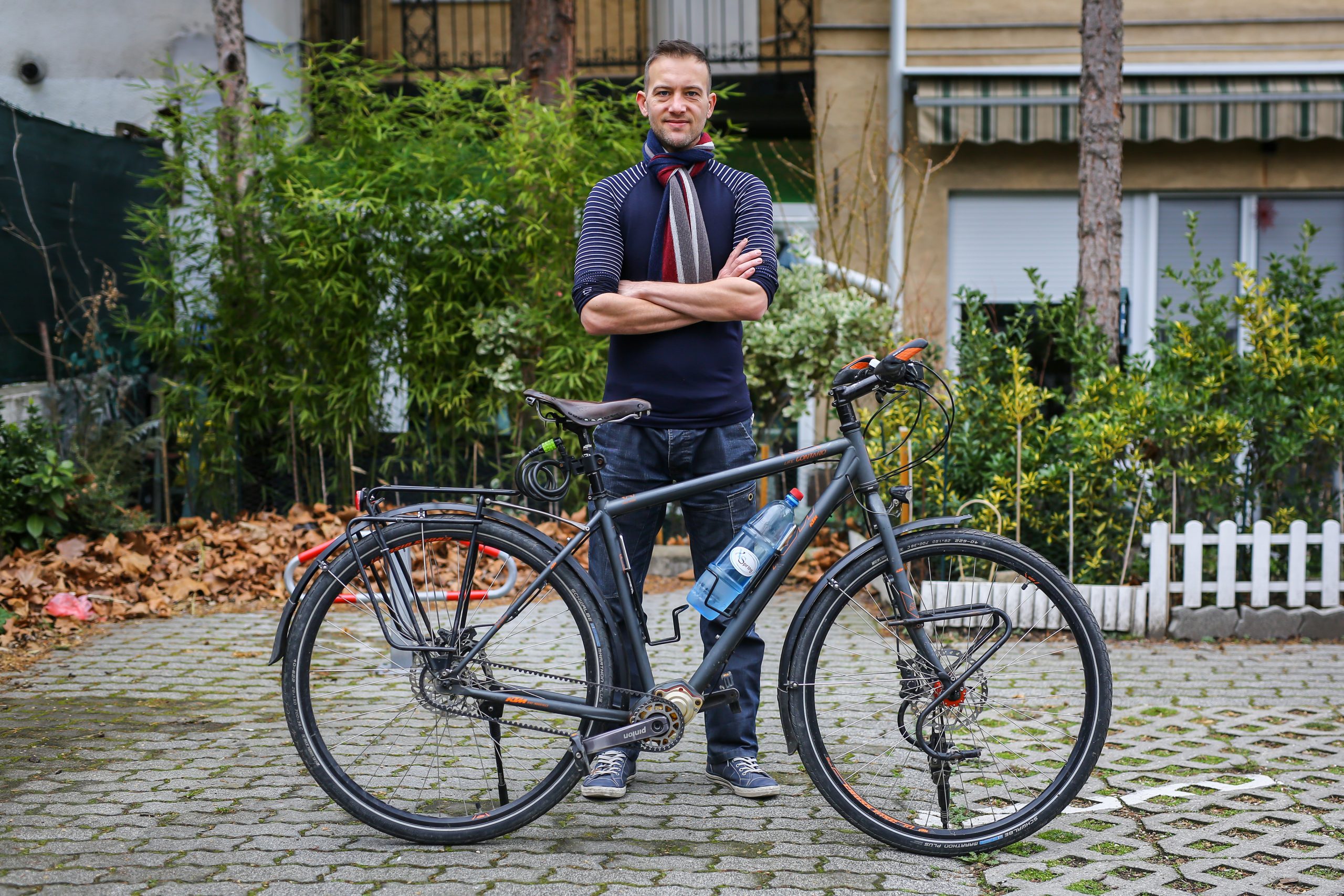 “Travel is the best school” – Interview with Adorján Illés, who cycled around the world

39 countries, 45,500 kilometers in 1,473 days, spending an average of 1,500 forints (4 euros) per day. These are the main parameters of Adorján Illés’ cycling expedition around the world. Leaving behind him a brilliant career as an engineer, he had to sell his possessions in order to be able to leave. However, it ultimately turned out to be a great decision, and not only did he gain a wealth of memories and experiences, but it seems his thinking was also fundamentally altered by the four-year journey. Interview.

How did you decide to leave everything behind and explore the world by bike?

Before, I was an engineer in a telecommunications company, I had fun, I made a lot of money, I learned a lot, but I felt that I was not fulfilling myself, I was fulfilling the dreams of a company instead of mine. So I thought I would like to do something that I enjoy doing and that creates value for people.
So in the summer of 2014 I quit my job and started doing motivational speeches, taking pictures, and that’s when I realized that was what I wanted to do. .

The idea of ​​the trip itself came a bit later than that. A friend of mine returned from a cycling trip to Europe in the fall of 2014 and a few days later he brought up the idea and I asked if I could participate. Then we rode together to Malaysia, went solo for a year, then reunited for five months from the United States to Mexico. 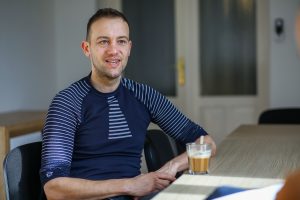 Was it hard to leave it all behind?

I don’t think it was difficult, I was very attracted to it all and couldn’t wait to go. I met a girl two months before we left, but I told her honestly about my plans, so we played fair. Anyway, we met her two years later in Indonesia and spent a week together.

How much of an escape was the trip?

It didn’t look like that at all. There’s a saying that good doesn’t equal great, and that’s exactly how I felt about my life before I left. Anyway, I also felt that what I had done so far had little quality. For example, my job was to make sure everyone could watch TV without any interruptions. However, I consider television to be brainwashed and didn’t want to be part of the team that attended.

How did you choose the direction?

We had been thinking for a long time between going east or west, and if I remember correctly, we finally decided to go east because of the weather. And the advice of a couple of Hungarian cyclists (Árpi and Zita) also helped us.

What was your vision/concept before the trip?

People obviously feared for our safety. I had never done anything like this before, not even a day bike tour. So my idea was not to preconceive anything. I was more focused on preparing and coping with whatever life threw at me and was eager to get started.

How long have you been preparing?

Although we were told that it took about 1 year to do a trip like this, we did it in about 5 months: we got the bikes, the equipment and the visas. Also, we found a bike shop in Csepel (Budapest’s 21st district) where we got a big discount on the price.

Well, probably not as much as I should have. Although I had been training constantly before, I had barely ridden a bike until the very beginning. So I suffered a lot during the first semester. 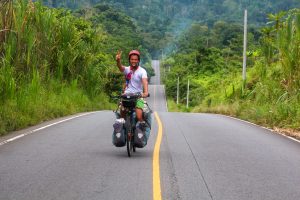 A long trip like that is usually very expensive. How were you able to cover the costs?

Fortunately, I received a severance package after quitting, but I also had to sell almost all of my possessions: carpets, furniture, washing machine, my piano and my synthesizer. I used the money to buy my bike, my equipment and to pay for my first visas.

Once during the trip, I had a serious source of income: in Japan, I raised about 1 million forints (2,670 euros) thanks to donations from the distribution of my travel photos. In fact, I loved Japan so much that I even changed my flight to a more expensive one just to make the most of my 90-day tourist visa.

It must have been a fairly low budget. How did you avoid running out of money?

About 1,500 forints (4 euros) per day. Of course, I didn’t always succeed, but I tried to stick to it. Each country had its own tricks. In Australia, for example, everything was obviously very expensive, but you could pick up a lot of still edible things from the bins behind the supermarkets, so I did a lot of digging through the bins. It’s a bit sad that people waste so much, but it was helpful for me.

Also, we were wild camping wherever we could, and it was easier to get free accommodation somewhere. Twice, in Bali and India, we even slept in jail cells in police stations, not as prisoners, of course, but that’s where the police could give us a free place to spend the night. People were very accommodating in most places.

One was planting trees. The original plan was that we would arrange for a sapling from each country to be transported on our bicycles to the next country and planted there. This was eventually changed so that we sourced trees locally and planted them with the locals. Eventually we put about 60 baby trees in the ground around the planet.

The other was to photograph people’s smiles, which then grew larger smile bookof which I am currently working on the English edition. 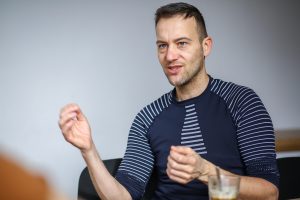 What were the biggest dangers along the way?

Vehicles often approached very closely on the public road and I had to be very careful not to be afraid but to keep the direction straight.

In terms of weather, the windstorms were perhaps the worst to contend with. Once in Australia during a rain storm I even had water flooding my tent which was pretty scary.

And in Nicaragua, a civil war was about to break out just as I was there. People were suspicious and in the cities you could feel the aggressiveness, you could cut the tension. There was also a huge windstorm so it wasn’t an easy walk there.

These long trips are always an opportunity to get to know each other. What lessons has the journey taught you about yourself?

I think I learned to trust myself, to trust life and to be grateful, to focus on the positive. My attitude has become much more positive and I’m trying even harder to focus on what I have rather than what I don’t have. I’m also much more aware, my awareness may have broadened considerably, because I had to be careful all the time on the road: myself, the road, traffic, budget money .

And what about people?

Compared to what I had been warned about before the trip, about Iran and Pakistan for example, the people there were the nicest. What I found was that the vast majority of people were otherwise helpful and open. Obviously bad things happen but that’s a thousandth of the truth and it’s a lot safer to be here on Earth than a lot of people think it’s just that a lot of the negative news is exaggerated and that disenchants you. The question is what do you focus on: the bad or the good, the lack or the opportunity? 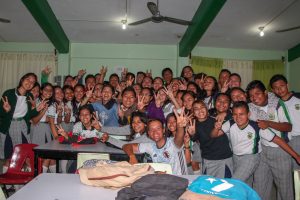 In a high school in Mexico. Image by Adorján Illés

Of course, I even cried a lot. I missed my parents, my brothers, my sisters and my home most of the time.

What did you miss the most in Hungary?

Nothing at first. But then I came back because I was too full of experiences. Generally, I never stayed more than two nights in the same place, although I sometimes stopped longer. But then my “adventure tank” filled up and I wanted to rest mentally, I wanted to be still. So in the end, after four years on the road, I couldn’t wait to get home.

How open are we Hungarians to travel?

Unfortunately, I think in general, we’re not really travel people these days. When I was twenty, traveling hadn’t crossed my mind either; for example, I didn’t even do an Erasmus scholarship at university.

I also think that we Hungarians are more pessimistic. Especially in comparison with the inhabitants of Central and South America. However, I disagree with some of my acquaintances who, when I told them how easily I was provided with accommodation after a few minutes of conversation, said that would definitely not be the case here. I think it could work here too, depending on the situation. 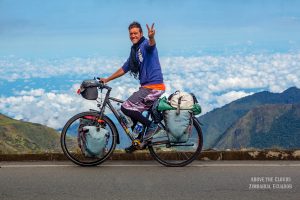 In Ecuador. Image by Adorján Illés

Have you found your place at home?

I don’t think I’ll ever really “happen”. I’m always moving in my head. Also, I don’t want and can’t fit into this society, for example, going back to work, sitting in front of a screen all day, pressing keys from Monday to Friday.

Did you know before the trip that you were going to be a motivational coach and a coach afterwards?

No. I became interested in spirituality, success and motivational meditation a few years before the trip. Then I realized that I also like talking about it, giving talks and trainings. And I also saw that I was helping people. I knew after the trip that I wanted to do something like this, but I didn’t have a photo. I knew I wanted to achieve my own dreams.

Is there a demand for this?

Yes, but it’s also something like a journey for me. And it all boils down to the mind, you have to achieve it, you have to realize that you can be a successful entrepreneur. 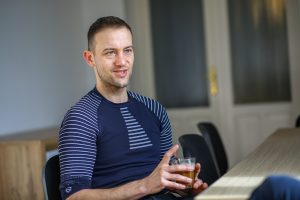 What message do you have for those who are also considering getting started?

Traveling is one of the best teachers, one of the best things about it is that you get out of the loop. Whatever life you lead, you probably have a system of what you do, when you do it, with whom you do it. And compared to that, leaving, especially abroad, is so special that we go directly into exploration mode. It’s very recharging. So my message is don’t overthink it, go for it, go for it!

Illés’ book, titled The Smile Book, was recently published. You can find more information about it here.